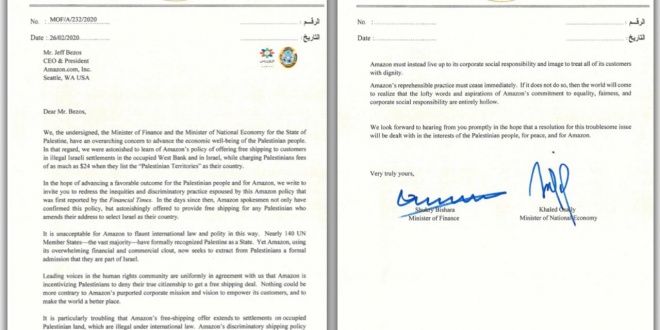 RAMALLAH, Wednesday, February 26, 2020 (WAFA) – The Palestinian government today called on Amazon e-commerce company to redress the inequities and discriminatory practice it has espoused toward the Palestinians in the occupied territories.

In a letter addressed to Amazon CEO and President Jeff Bezos, Palestinian Minister of Finance, Shukri Bishara, and Minister of National Economy, Khaled Osaily, said they were astonished to learn of Amazon’s policy of offering free shipping to customers in illegal Israeli settlements in the occupied West Bank and in Israel, while charging Palestinians fees of as much as $24 when they list the “Palestinian Territories” as their country.

“In the hope of advancing a favorable outcome for the Palestinian people and for Amazon, we write to invite you to redress the inequities and discriminatory practice espoused by this Amazon policy,” the two ministers said in the letter.

They said they were surprised to learn that in order to remedy this, Amazon has suggested that the Palestinians in the occupied territories put their address as “Israel”.

“It is unacceptable for Amazon to flaunt international law and polity in this way,” said the two ministers in their letter so Bezos. “Nearly 140 UN Member states – the vast majority – have formally recognized Palestine as a State. Yet Amazon, using its overwhelming financial and commercial clout, now seeks to extract from Palestinians a formal admission that they are part of Israel.”

Bishara and Osaily accused Amazon of aiding and abetting Israel’s violation of international law when it offers free shipping to settlements in the occupied Palestinian land, which they said are illegal under international law.

“Amazon’s reprehensible practice must cease immediately,” they said. “If it does not do so, then the world will come to realize that the lofty words and aspirations of Amazon’s commitment to equality, fairness and corporate social responsibility are entirely hollow.” 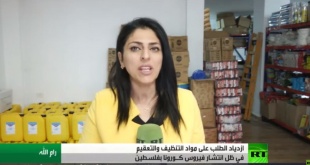 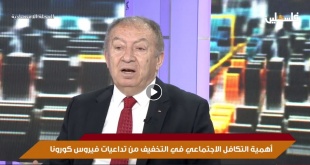 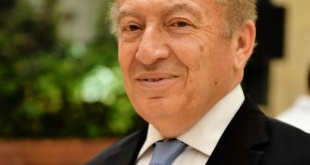 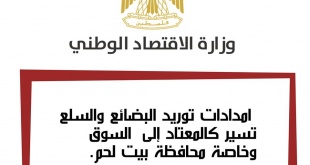 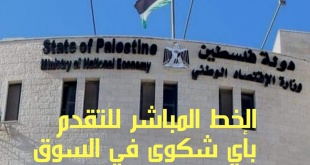